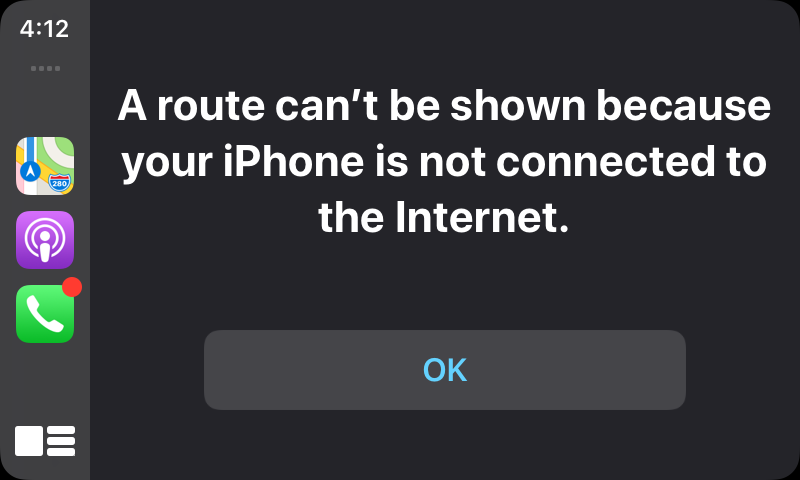 At the current state of cellular coverage, one cannot safely assume that a broadband connection will be available to the users at all times. Even when driving in around near Apple’s headquarters in Silicon valley, the reception regularly drops out, so the problems aren’t isolated to some remote places and Apple clearly must see the issues in day-to-day testing.

The great user experience gets spoiled by the fact that the system can rarely used as intended because the infrastructure it relies on simply isn’t there. 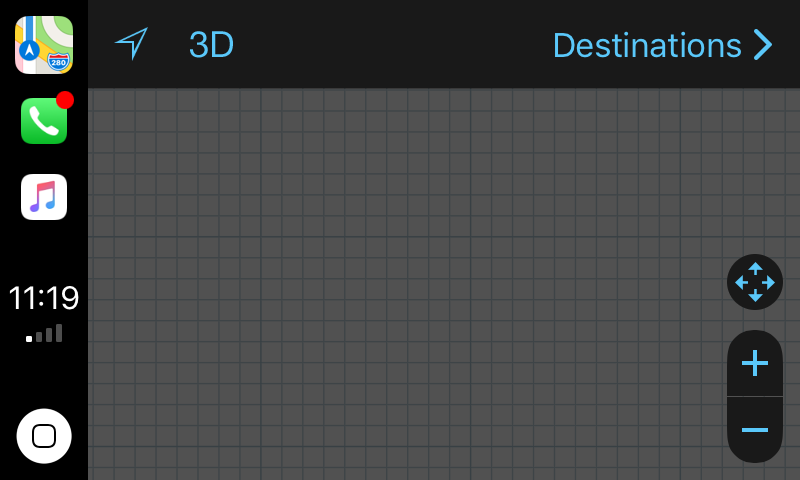 In-car navigation systems have been around since the mid-80s they had clumsy controls and CRT (!) screens, but until recently, they had one thing in common: they worked. No matter where you wanted to navigate from, they would make their map data available to the user (given that they were in a covered area).

While I’m very happy that my car (2018 VW Tiguan) has its own, offline-capable navigation system with POI search in addition to CarPlay, other vehicles (e.g. the 2018 Toyota Camry) rely entirely on CarPlay in the lower trim levels.

CarPlay for navigation, in theory, is a great idea. When I have an appointment in my iCloud calendar, I just need to plug in my phone and CarPlay will know where I’m going, the problem is that it never works, because my car usually starts its mornings in a Parking Garage with zero cellular reception. This means that I’ll enter the address in my built-in navigation system again.

On a side note, there are Apps that allow offline navigation using carplay, but it’s not the same plug-and-play integrated experience as Apple maps.

Or, in the worst case, it means that you can take your brand-new Toyota Camry with a shiny touchscreen showing a map to the middle of nowhere (for example, across the street from the Apple Campus in Cupertino) and then try to get directions only to learn that it doesn’t work.

The only solution is for apple maps as well as the routing to be made available offline. Like Automotive-Grade infotainment systems, it will route and map with the on-board data available and supplement with real-time traffic or updated map data if available. 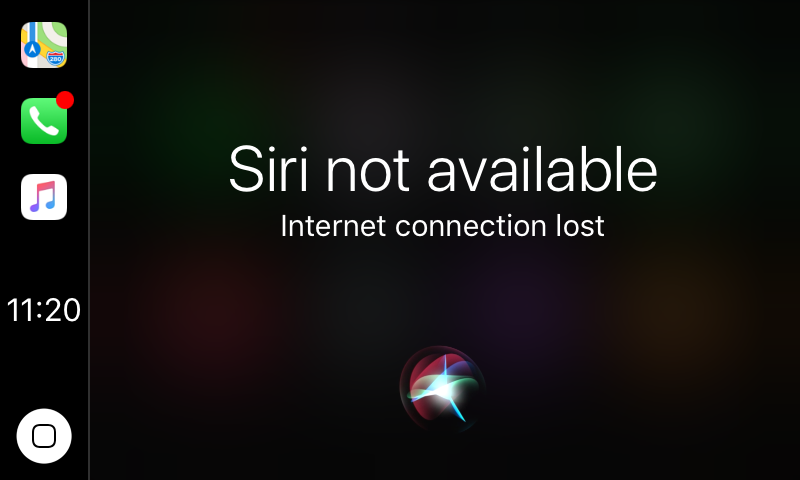 Apple has continuously improved Siri since it was released 8 years ago. However, the iPhone 3GS I had at the time already supported voice recognition before Siri. I remember using it to play particular iTunes songs and call people. When Siri came out, I was overwhelmed with the possibilities, but missed the ability to just call users by name immediately without my phone having to send a sample of my voice into the cloud only to time out because my reception was suboptimal.

Again, like Automotive-Grade systems, Siri should be able to answer simple requests offline while only relying on the cloud for more complicated requests that cannot be resolved with the on-board voice recognition or available data.

Modern vehicles that support CarPlay often have their own (offline) voice recognition, but they’re not as tightly integrated. If I ask my Volkswagen Infotainment system to stop navigation, it won’t stop it if the navigation is running through CarPlay. Likewise, if the in-car navigation is running (because I started driving in a parking garage),  Siri won’t be able to stop it.

The competitor, Android Auto, suffers from similar problems, but Google Maps has an advantage where users are allowed to download maps for offline use.