Many video games are designed to evolve over time. The development process isn't finished once the game is released but is to be continued as long as there's demand. Most games designed that way are subscription-based online games. The demand can easily be foreseen by looking at the number of active subscriptions and the development of additional content and updates is funded by the subscription fees.

Until about 5 years ago, additional content for anything but MMORPGs was usually delivered by releasing a sequel to the first game, based on the same engine or by releasing an expansion pack. 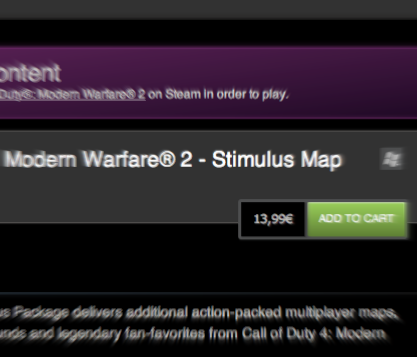 Now, In the internet age, publishers are delivering additional content online. In the beginning, such content was still free (like the Additional quests for The Elder Scrolls III: Morrowind) , but the establishment of content delivery systems such as XBOX live or Steam made it suitable for the mass and everybody could easily buy additional game content online. (like the Additional Quests and Items for The Elder Scrolls IV: Oblivion)

In theory, this is a win-win situation. The game's publisher makes more money, the user gets to choose more content if he really likes the game.

Actually, however there are certain issues that prevent the breakthrough and make DLC a somewhat peripheral matter. Non-subscription based Games still need to be designed to be working perfectly well without any of the additional content but on the other side, there has to be an incentive to buy it.

Video games have evolved from the nerd-hole in the basement to the living room and almost any game now makes use of social features, may it be Achievements, content sharing or co-operative gameplay where the XBOX live or whatever-social-gaming-network friends can easily join the running game. DLC should perfectly fit this social gaming concept and even sell better due to word-of mouth.

However, looking at a real-life example, shows us a problem:

Let's say, Player A wants to play Gears of War 2 with his friend, Player B. Player A has downloaded a Multiplayer map pack from XBOX live but player B hasn't. The friends now have three options:

All these options have one in common: they suck.

Gears of war isn't the best example, however, because the game is quite popular and many players have purchased the Downloadable content. There's a much bigger problem with games that are under a certain popularity threshold.

Let's have a look at Race Driver: GRID. The game itself is quite popular, but none of my friends own a license for the Download Content on the XBOX360. So I'm the option-A-type. I wonder why I even purchased the DLC at all. This must be a common problem since only one of the 3 DLC-packs was released which indicates that the DLC didn't exceed the magic popularity threshold and made codemasters halt the development.

Lose-lose-situation. The DLC was great but the people who have it can't really play it because it's multiplayer DLC and it's hard to find anyone who has it and the publisher can't sell it. This is a chicken-egg-problem. Nobody plays the DLC because nobody has it and nobody has it because nobody plays it. It is actually possible to find some people playing it on XBOX live, but hey, we're talking about social gaming here and what's social about it if you can't play with your friends?

However, since the DLC is optional, these issues are kept to a limit and don't effect the playability of the core game. Players of FlatOut: Ultimate Carnage aren't that lucky. Basically, bugbear updated FlatOut 2 so much that they decided to release it as a new standalone title. The problem is, that, since it is basically an update, most players kept playing FlatOut 2 and those who purchased FlatOut: Ultimate Carnage, faced empty servers which made it impossible to play ranked online matches (unless you had convinced 3 friends to purchase the game, too).

This doesn't mean that bugbear's decision to make a new standalone game was wrong. It was the most reasonable in order to release the product in the best quality possible since they didn't have much of a choice.

Gameplay-Wise, the best version would have been to update FlatOut 2 but nobody would have paid for that and charging a fee would have split the community because you couldn't be sure that everyone purchased the update. This brings us to the second issue:

The design-wise biggest problem about DLC is, that the games still need to work without it.

To achieve the best result, all aspects of a game must be balanced with all other aspects in mind. This may work good with the main title, but since DLC always adds something, it's often hard to keep the game balanced. Often, the main game is updated with the release of DLC but this can only be done within reason in order to keep the balancing of the game without the DLC.

Each of the DLC-Packs of Fallout 3 were well-designed to expand the the main game without making anything obsolete, but with all the DLC-Packs installed, the game felt far too easy because there were just too many unlockable things that deskilled the game in one or another way.

Another example is the Sims 2 with its half billion of expansion packs. All of them were working with the original game and all the other expansion packs which resulted in a design-nightmare and was the reason that I stopped playing the sims.

For example, one of the expansion packs added vehicles. Now, sims could buy a car to drive to work. But they didn't have to since in the main game, it was still possible to make use of a carpool for free.

They could also "teleport" to community lots before so the new cars were devalued to lot decoration because you could get the same for free. However, they couldn't remove the feature that allowed sims to go to work for free, because there were players who didn't have the expansion pack and whose sims still needed to have a way to go to work.

These kind of problems wouldn't exist if designers could be sure that all of the players received the updated content. A subscription-based The Sims 2 would have allowed the game designers to truly develop the game and not just add more and more stuff to generate more and more sales without actually generating more and more gameplay value. However, most players wouldn't subscribe to a game they don't play as often as an MMORPG.

Rarely, the concept of updating games for free and betting on the word-of-mouth about the regular free updates generating more sales, works. A great example is Team Fortress 2. The game has constantly been updated for years and still seems to sell well (because otherwise, we wouldn't have out free updates). A problem problem is, that one day, literally every potential customer on the planet already owns Team Fortress 2 but there will be many more updates until this goal is achieved.

The other reason is obvious at the second glance: valve is an independent company, but who wants to tell a conference room full of 60-year old shareholders of Activision Blizzard that he wants to invest in free content just to please the game community?

The problem about charging money for in-game content in free-to-play games is similar to the problems about the DLC:

It splits the community. Players can still play together on a server but players who pay for these items have advantages. This is against the idea of an online game where everyone has the same chances, no matter who the players are in their real life and how much money they have at their disposal for things like items in online games. There are free-to-play- games that only charge for items that do not directly affect gameplay, however but it's still the same kind of thing. You pay for having access to something other players don't have.

The popularity of micropayment-games like Farmville shows that players want payment options that go beyond simply purchasing the game, no matter how much you're playing it and not being able to play with your friends if you haven't purchased the game.

However, I believe that micropayment is a dead end and we certainly won't be able to purchase a M4 clip for 5¢ in the next Call of Duty.

There must be another way to meet the requirements of a modern, social and evolving game. The expense for playing the game at all just to play with some friends must be kept at a minimum but on the other side, the game must be updated and expanded after the release without locking players who didn't purchase additional content out of anything.

all you can play

Several providers are offering an "all you can play" gaming-service in one or another way, but these services have one in common. They are offering a range of licensed video games for play in exchange for a monthly fee. The games are already finished and also sold on other distribution channels. The games provided this way are basically the same games you can get in a store. They're also updated the same way and don't receive any additional content, even as you pay every month. The providers usually pay a set amount of money to the publishers of the game in order to offer the games on the online gaming service.

So here's my Idea and I believe, such a service will emerge in the next years.

The customer simply pays per second he's playing any game. Most of the money goes to the publisher of the particular game he's playing. If the customer wants to play another game, he simply can without subscribing to anything else because all the games available at the service (let's say, LIVE on the next XBOX or game center on the next Apple TV) are paid exactly the same way. 1 cent per 36 seconds, for example. Paid after every week or in advance via prepaid-cards (just like itunes).

This would be a win-win situation.

Seems like a cure-all, right? What do you think?